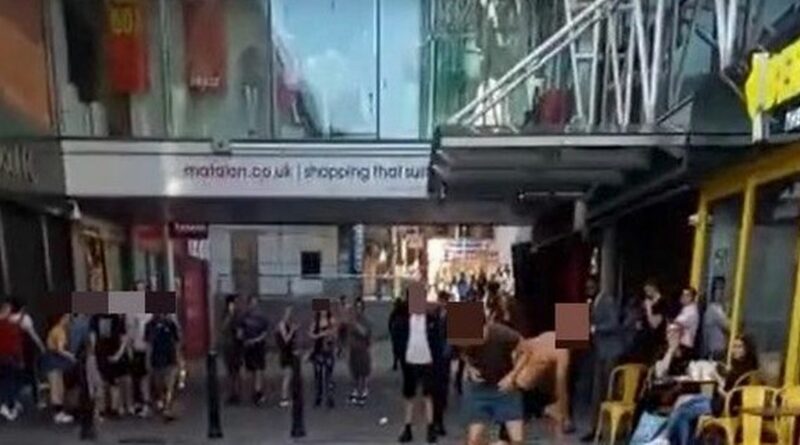 Yobs were caught on camera fighting in the street and throwing chairs at each other they had pinched from a kebab shop.

In the clip, recorded in Liverpool city centre on July 19, a shirtless man in black shorts appears to throw a wild punch at a man wearing a grey t-shirt.

He then grabs a yellow chair from outside the Berlin Doner restaurant in Brythen Street and holds it threateningly.

Customers are still seated outside eating their meals as the fight breaks out and many looked terrified.

After a gap in the footage, a group of men hurl yellow chairs at the window of the Berlin Doner while glass is audibly breaking.

Merseyside Police said one 29-year-old man, from Liverpool, was arrested on suspicion of affray at the scene and later released under investigation.

Detective Inspector Jennie Beck said: "Although our officers were able to make a swift arrest our enquiries into the incident continue and we would ask anyone with any information to come forward.

"Williamson Square was very busy at the time of the incident with people out and about shopping and enjoying the sunshine. If you saw anything, or captured anything on mobile phone, please get in touch, either with us, directly, or anonymously through Crimestoppers.

"Information you hold could be vital to our investigation and bringing those responsible to justice."

Detective Inspector Beck said: "Our City Centre should be a safe space for all in Merseyside to enjoy after a long and difficult lockdown and we simply will not tolerate behaviour such as this which is concerning for businesses, residents and visitors alike."