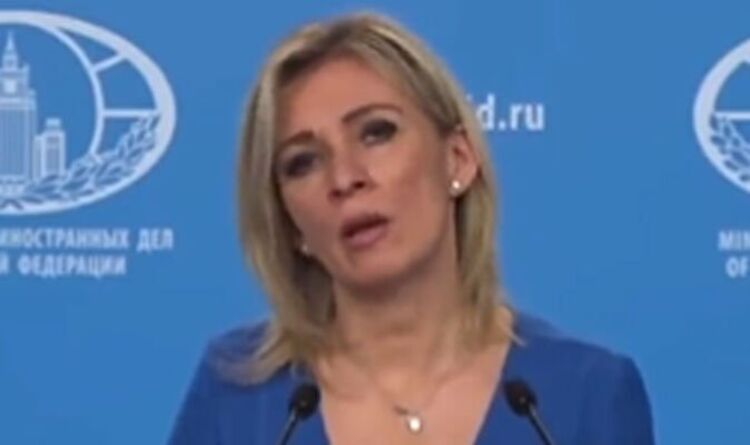 In a bizarre rant this week, Ms Zakharova claimed Ukraine’s refusal to share its recipe for borscht with Russia shows that it is governed by “xenophobia” and “Nazism”. She said: “And like I said, everything that was tied to ethnicity, to culture, was targeting in the first instance. Even culinary books, they were also banned.

“It has to belong to just one group. Only one group, only one people. Only one nationality.

“But for it to be shared… and so that in every town, or in every region every housewife could make it their own way – No!

“They didn’t want to compromise.

“This is precisely what we’re talking about – xenophobia, Nazism!

“Extremism in all its forms.”

It comes as Russia’s foreign ministry said that footage of dead civilians in the Ukrainian town of Bucha had been “ordered” by the United States as part of a plot to blame Russia.

“Who are the masters of provocation? Of course the United States and NATO,” Ms Zakharova said in an interview on state television late on Sunday.

Ukraine: Russian soldier tells woman grave was 'to put you in'

Zakharova said the immediate Western outcry over the images of dead civilians indicated the story had been part of a plan to sully Russia’s reputation.

“In this case, it seems to me that the fact that these statements (about Russia) were made in the first minutes after these materials appeared leaves no doubt as to who ‘ordered’ this story.”

Ukrainian authorities said on Sunday they were investigating possible war crimes by Russia after finding hundreds of bodies, some bound and shot at close range, strewn around towns outside the capital Kyiv after Russian troops withdrew from the area.

Russian authorities have said the photographs and footage broadcast from Bucha are a “provocation” designed to disrupt peace talks between Moscow and Kyiv. The Russian defence ministry said the images were “another staged performance by the Kyiv regime.”

Footage and photographs of dead civilians strewn across the town have prompted Western countries to call for those responsible for war crimes in Ukraine to be punished.

Russia, in turn, requested that the United Nations Security Council convene on Monday to discuss what it called a “provocation by Ukrainian radicals” in Bucha.

Russia sent tens of thousands of troops into Ukraine on February 24 in what it called a special operation to degrade its southern neighbour’s military capabilities and root out people it called dangerous nationalists.

Ukrainian forces have mounted stiff resistance and the West has imposed sweeping sanctions on Russia in an effort to force it to withdraw its forces.