The vet parents of a baby boy whose life was saved by heart surgery have thanked the doctor who performed the procedure by treating his French bulldog for the same condition.

Mattia Ferasin, now four, was born with a hole in his heart and needed a seven-hour operation to save his life.

Dr Caner Salih, one of the cardiac surgeons involved later revealed that his pet bulldog Büdu had the same heart problem – a ventricular septal defect – and Mattia’s parents Luca, 54, and Heidi – who are veterinary cardiologists – immediately volunteered to help when they found out.

The surgery on the dog was a success and, in another twist, Büdu and Mattia have become best friends. 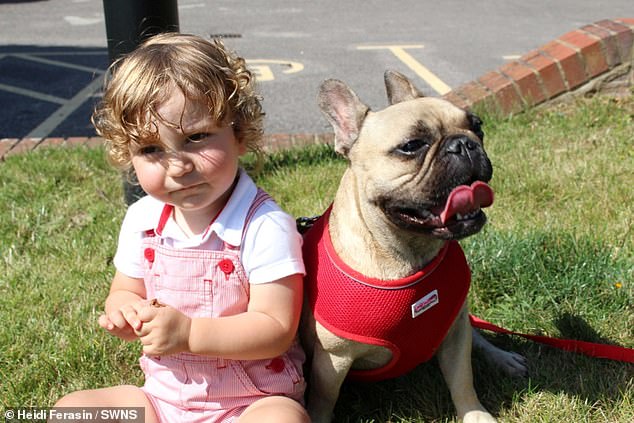 Mattia Ferasin, left, needed open heart surgery shortly after birth due to a hole in his heart. One of the doctors involved later revealed his French bulldog Büdu, right, had the same problem and Mattia’s vet parents were quick to treat him 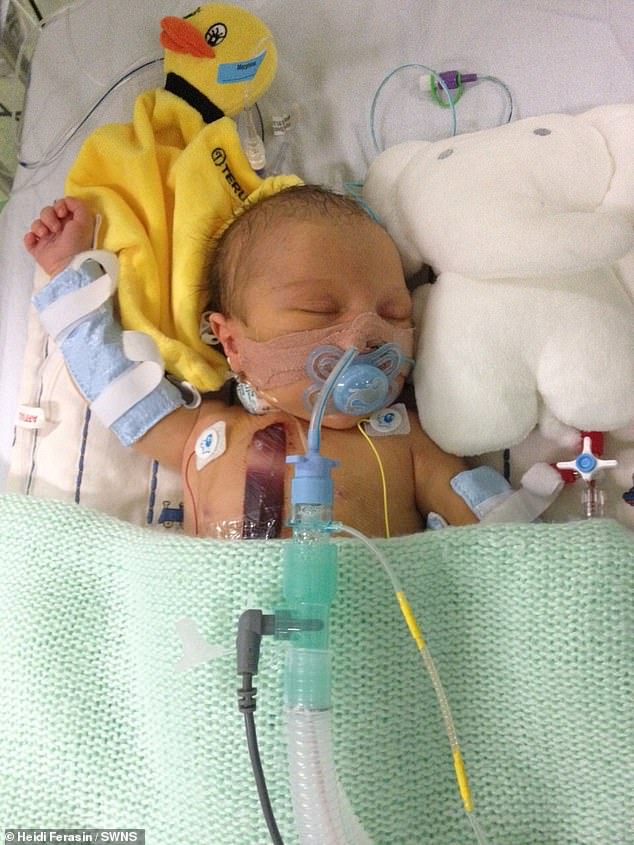 Mattia was born with a ventricular septal defect and a narrow aorta which limited the flow of blood to the loer half of his body. He needed a life-saving seven-hour operation at Evelina London Children’s Hospital to correct the problem 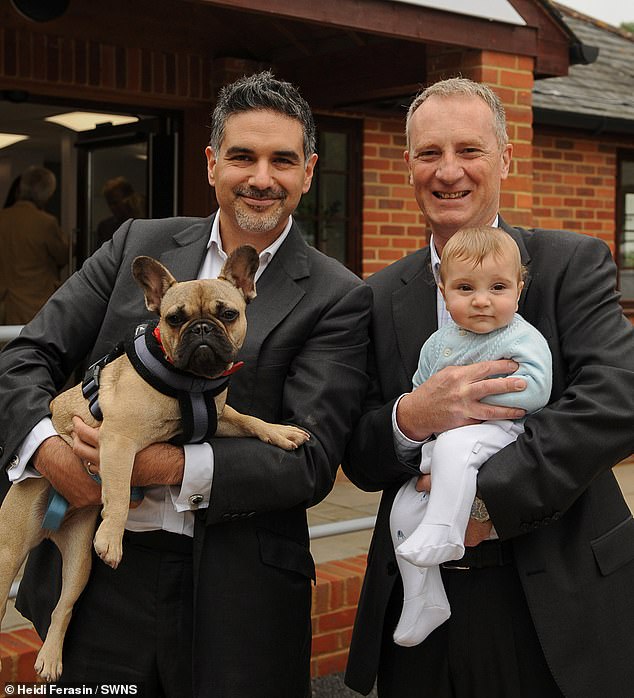 One of the surgeons who performed the operation, Dr Caner Salih, left with French bulldog Büdu, later revealed his dog had the same condition and Mattia’s parents Luca, right with his son, and Heidi, both vets, immediately volunteered to treat the animal

Mrs Ferasin, 38, from Four Marks, Hampshire, said: ‘We are forever indebted to the whole team of doctors who helped Mattia.

‘Without their skill and knowledge of all the staff we are well aware that we wouldn’t have Mattia with us now.

‘This is our way of giving something back because no words can ever express the gratitude that we feel.’

She added: ‘We have always felt that we owe all the staff so much.

‘We are very aware that without their skill, passion and compassion, Mattia may not be here today.

‘Thanks to the surgery and the ongoing care of the cardiology team, Mattia is a thriving, healthy and happy little boy who just celebrated his fourth birthday.’ 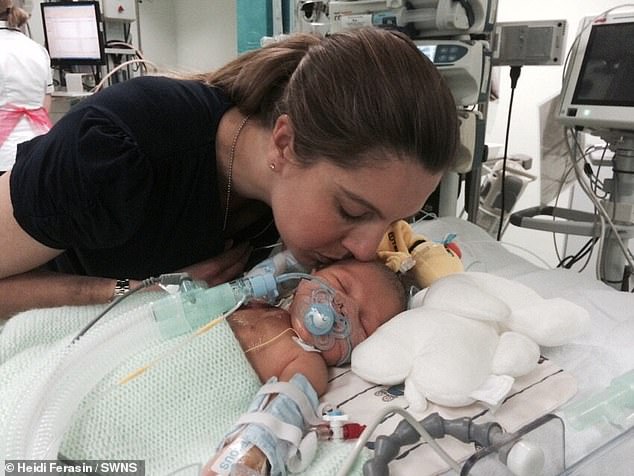 Mrs Ferasin, pictured with Mattia in hospital shortly after his birth, said treating Büdu was their way of ‘giving back’ because ‘words cannot express the gratitude we feel’ 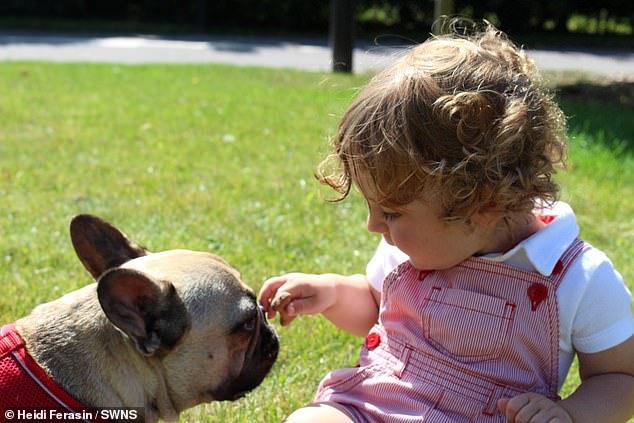 Mattia and Büdu, pictured together, have now become the best of friends and regularly meet up for playdates

Dr Salih, 58, added: ‘Büdu has now made a full recovery. He’s not the brightest dog in the world but he’s family.’

Mattia was born at St Thomas Hospital in London with a hole in his heart and a narrow aorta that was limiting the blood supply to the lower half of his body.

The conditions – a ventricular septal defect and coarctation of the aorta – were picked up 20 weeks into Heidi’s pregnancy.

What is a hole in the heart and how is it treated?

A ventricular septal defect, frequently known as a hole in the heart, is a common heart defect that’s present at birth.

The hole (defect) occurs in the wall that separates the heart’s lower chambers and allows blood to pass from the left to the right side of the heart.

The oxygen-rich blood then gets pumped back to the lungs instead of out to the body, causing the heart to work harder.

Small holes may not cause problems and can go completely unnoticed, but larger defects often require surgery after birth.

The condition is much less common in animals but does occur, and usually presents in the form of a heart murmur.

Treatment for animals usually includes medication and management plans to avoid putting too much strain on the heart, and rarely involve surgeries.

He was operated on at the adjoining Evelina London Children’s Hospital when he was six days old in March 2015.

Mother-of-two Mrs Ferasin, who also has a seven-year-old son called Dante, said: ‘When we found out about the heart condition it was really frightening to hear.

‘It’s not what any parent wants to hear. We struggled with the unknown and the uncertainty of it. We knew that when he was born he would have to undergo risky surgery.

‘We had no idea what his quality of life would be like afterwards.’

Doctors had warned his parents there was a 10 per cent chance of Mattia not surviving the risky open heart surgery.

The seven-and-a-half hour operation was led by Dr David Anderson and was a success.

Mattia was allowed to go home for the first time six days after surgery.

Mrs Ferasin said: ‘It was horrible to see him like that in intensive care.

‘We sat by his side and there was nothing we could do. The surgery took longer than we thought it would so we got really worried.

‘When we first saw him, after the operation, it was a traumatic sight. There were lots of tubes and cables and he looked very swollen.

‘I broke down in tears because he had survived the surgery. He came through it and that was a massive relief.

‘Now he is a happy, healthy, thriving ray of sunshine. Life is happy and we have two happy little boys.’ 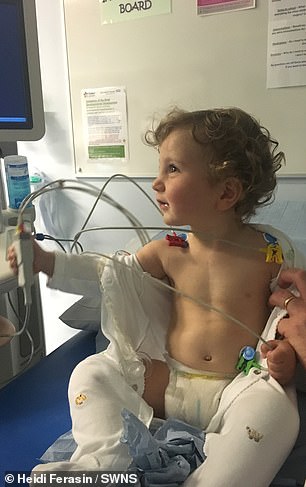 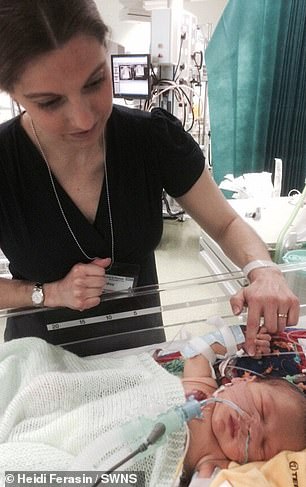 Mattia, pictured left, had a 10 per cent chance of dying during the surgery and his parents said it was traumatic seeing him in intensive care, right 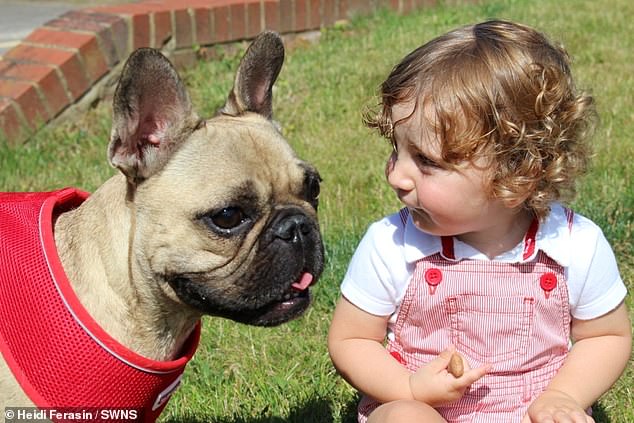 Mr Ferasin examined Büdu, left, and found a way to manage his condition without surgery, which led to the hole closing. Pictured right is Mattia

While medics were treating Mattia, Heidi and Luca became friendly with the medical team.

After the procedure Dr Salih told them he had a bulldog who was suffering from a heart murmur.

Mr and Mrs Ferasin then invited Büdu and Dr Salih to their surgery, Lumbry Park Veterinary Specialists, to try to find out what was wrong.

Incredibly, Mr Ferasin discovered Büdu was suffering with one of the same heart defect as Mattia.

The pup had ventricular septal defect and required an urgent assessment to establish how it could be treated.

Unlike Mattia, Büdu didn’t require surgery and so Mr Ferasin provided Dr Salih with a number of management options for how to care for his dog at home and regular check-ups.

And when the pair returned a year later, Mr Ferasin was shocked to find Büdu’s hole in his heart closed without surgery.

He said: ‘When the image of the defect appeared on the screen of my ultrasound machine during Büdu’s examination, I was so surprised because it was one of the same congenital defects that Mattia had.

‘Büdus defect closed within a year, which was even more surprising.

‘This outcome has only been reported in a couple of cases in veterinary history.’

Mattia and Büdu are now friends for life and have frequently met up for play dates. 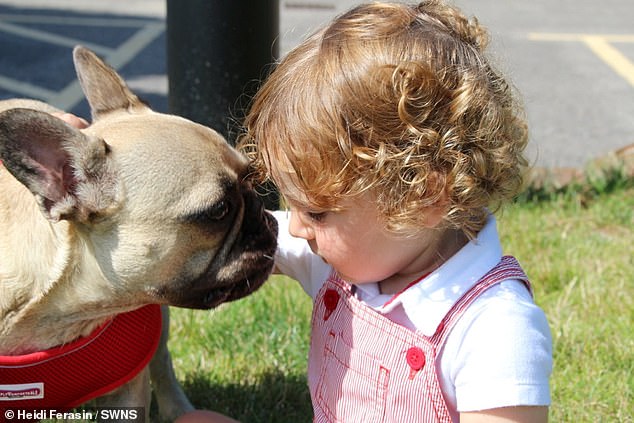 They were be joined by Vicki’s sister-in-law Susanna Cooper and Heidi’s 72-year-old father Rob Cooper, a retired firefighter and proud grandfather.

Mattia, his seven-year-old brother Dante and grandmother Geraldine Cooper cheered the fundraisers on from below.

To help the family meet their fundraising target, visit: https://uk.virginmoneygiving.com/Team/PawPals