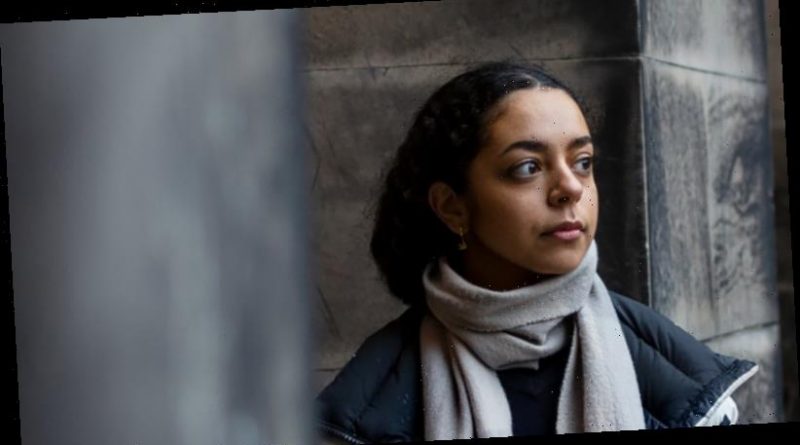 London: Life seemed promising last year to Philaé Lachaux, a 22-year-old business student in France who dreamed of striking out on her own in the live music industry. But the onset of the pandemic, leading to the loss of her part-time job as a waitress, sent her back to live at her family home.

Now, struggling to envision a future after months of restrictions, Lachaux says that loneliness and despair seep in at night.

“I look at the ceiling, I feel a lump in my throat,” she said. “I’ve never had so many suicidal thoughts.” 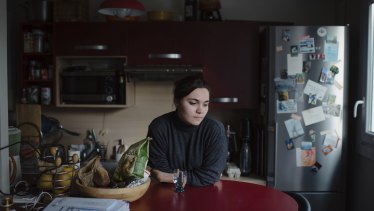 Philae Lachaux at her family’s home in Viroflay, France. The lockdowns have been particularly hard on the mental well-being of the young. Credit:New York Times

“The pandemic feels like a big stop in our lives,” she added. “One that puts us so low that I wonder, ‘What’s the point?‘”

With curfews, closures and lockdowns in European countries set to drag into the northern spring or even the summer, mental health professionals are growing increasingly alarmed about the deteriorating mental state of young people, who they say have been among the most badly affected by a world with a foreshortened sense of the future.

Last in line for vaccines and with schools and universities shuttered, young people have borne much of the burden of the sacrifices being made largely to protect older people, who are more at risk from severe infections. But the resilience of youth may be overestimated, mental health professionals say. 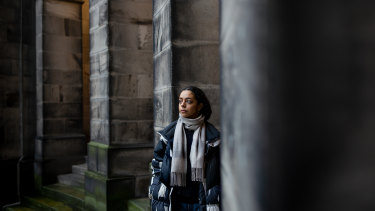 Dalia Al-Dujaili, a student at the University of Edinburgh, on campus in Scotland.Credit:New York Times

Faced with a restricted social life and added uncertainty at an already precarious moment in their lives, many young people are suffering from a gnawing sense that they are losing precious time in their prime years.

Across the world, they have lost economic opportunities, missed traditional milestones and forfeited relationships at a pivotal time for forming identity.

“Many feel they’re paying the price not of the pandemic, but of the measures taken against the pandemic,” said Dr Nicolas Franck, the head of a psychiatric network in Lyon, France.

In a survey of 30,000 people that he conducted last spring, young people ranked the lowest in psychological well-being, he said.

In Italy and in the Netherlands, some youth psychiatry wards have filled to record capacity. In France, where the pandemic’s toll on mental health has made headlines, professionals have urged authorities to consider reopening schools to fight loneliness. And in Britain, some therapists said that they had counselled patients to break lockdown guidelines to cope. 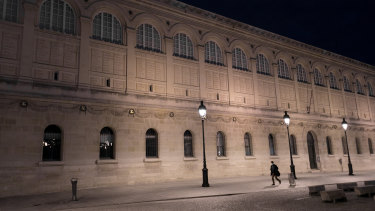 A lone student at the Sarbonne in Paris. Credit:New York Times

In the United States, a quarter of 18- to 24-year-olds said they had seriously considered suicide, one report said. In Latin America and the Caribbean, a survey conducted by UNICEF of 8000 young people found that more than a quarter had experienced anxiety and 15 per cent depression.

And a study conducted last year by the International Labor Organisation in 112 countries found that two-thirds of 18- to 29-year-olds could be subject to anxiety and depression.

The lasting effects on suicide rates, depression and anxiety are still being measured, but in interviews, a dozen mental health experts in Europe painted a grim picture of a crisis that they say should be treated as seriously as containing the virus.

“We are in the midst of a mental health pandemic, and I don’t think it’s treated with near enough respect,” said Arkadius Kyllendahl, a psychotherapist in London who has seen the number of younger clients double in recent months.

A sense of limbo

Many European countries went into northern autumn with the illusion that they had curbed virus outbreaks, only to face an even larger wave of infections this winter. That led to mistaken expectations, young people said, that harsh restrictions would soon end.

Lockdowns have offered some a respite from the stresses of school or work, which have made them more resilient, psychologists say. But for others, especially those who already struggled with mental health conditions or limited access to care, their fragility has been exacerbated. 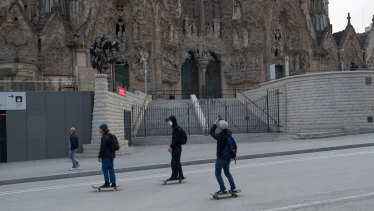 Skaters ride on the first day of the coronavirus pandemic lockdown in Barcelona in March 2020.Credit:New York Times

“Not being in control of something like this is anxiety inducing,” said Dalia Al-Dujaili, 21, a student at the University of Edinburgh.

As the pandemic has dragged on, so has the sense of limbo, she said, and she tried online therapy for the first time last year.

“What am I doing? Why am I getting a degree, if there’s not going to be any jobs?” she asked.

One blessing, she said, is that younger people are more open to discussing their struggles.

“Everybody talks about their therapists and their meds,” she noted. 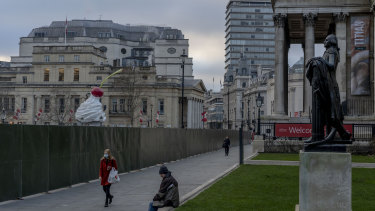 Trafalgar Square in London. With the pandemic lockdowns set to drag on, mental health professionals are growing increasingly alarmed about the deteriorating mental state of young people.Credit:New York Times

That has not stopped some from feeling guilty, however, given that the pandemic has affected everyone.

“There are people with bigger struggles: people who have lost their jobs, or a relative to the disease,” said Marcelo Andreguetti, a Brazilian graphic designer who studies in Cologne, Germany.

He said he began taking antidepressants after he was told he had depression and obsessive compulsive disorder this year.

‘Loneliness brings them into despair’

Winter has worsened the situation, according to therapists and psychiatrists, who say they have seen young people manifesting more severe symptoms of anxiety, depression, eating disorders and addictions.

In the Netherlands, Dr Robert Vermeiren, a professor of child psychiatry at Leiden University Medical Centre, said the acute ward he manages has been full for weeks — something he had never experienced.

The situation was so serious, he said, that his team did not send children home for Christmas, as it usually would. Isolation has also disrupted the usual teenage transition, when young people move from belonging to their family to belonging to their peers, Vermeiren added.

“They feel empty, lonely, and that loneliness brings them into despair,” he said.

In Italy, calls doubled last year to the main hotline for young people who have considered or attempted harming themselves. Beds in a child neuropsychiatry unit at the Bambino Gesù Children’s Hospital in Rome have been full since October, said Dr Stefano Vicari, director of the unit.

Hospitalisations of young Italians who harmed themselves or attempted suicide have increased 30 per cent in the second wave of cases, he added.

“To those who say that, after all, these are challenges young people have to go through, that they will come out stronger, this is only true for some, those who have more resources,” Vicari said.

Catherine Seymour, head of research at the Mental Health Foundation, a Britain-based charity, said that young people living in poorer households were more likely to experience anxiety and depression, according to a study conducted among nearly 2400 teenagers.

“It may be that those in poorer households are more likely to lack enough space and internet access to help with schoolwork and communication with their friends,” Seymour said. “They may also be affected by their parents’ financial worries and stress.”

Studies from the first lockdowns suggest that they may have already left an indelible mark.

In France, a survey of nearly 70,000 students found that 10 per cent had experienced suicidal thoughts during the first months of the pandemic, and more than a quarter had suffered from depression.

In Spain, one of the world’s toughest lockdowns last spring had a profound impact, especially for young girls, who were more likely to experience stress, anxiety and depression, according to a survey of 523 people by the University of Valencia.

Konstanze Schoeps, one of the study’s authors, said, “They were developing their own freedom and space, and during lockdown they lost what they had just started to experience.”

“It amounted to a process of grieving,” she added.

A search for remedies

The situation has become so dire that students and mental health advocates have asked authorities to moderate some measures, including by reopening schools and universities, even as officials worry that a premature easing of regulations will worsen the spread of new variants.

“Building social relationships is at the centre of our lives, and that is gone,” said Heïdi Soupault, 19, who urged President Emmanuel Macron of France to reopen universities in an open letter that spread quickly on the internet last month.

Starting this month, students in France can return to universities one day a week. They can also get three free therapy sessions.

In Britain, where mental health organisations and experts have urged the government to divert funding to help address the issue in schools, officials have said that they will consider mental health support as part of plans to lift restrictions. In the Netherlands, the central government has pressed regional authorities to invest more in youth mental health.

Dr Silvia Schneider, a child and adolescent psychologist in Bochum, Germany, said that governments should share clear messages on television and social media.

“We need to give very easy accessible information on how to handle the feeling that they are not alone with these challenges,” Schneider said about young people. “And that there are some things that can help them.”

To combat symptoms of anxiety and depression, some therapists, like Kyllendahl in London, are telling their clients to go outside as much possible — even if it involves breaking restrictions.

“At least the pandemic has given us the right to be sad,” said Lachaux, the French student. “We don’t have to show all the time how strong we are.”