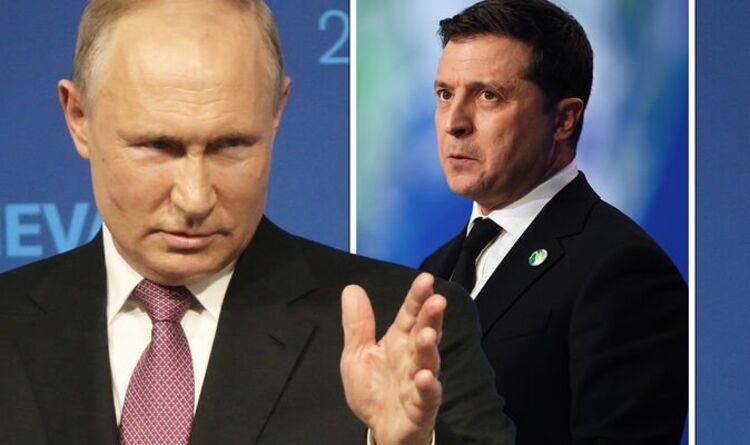 With the second night of military operations pounding the capital Kiev, as well as a host of other major cities in Ukraine coming under fire, the situation remains tense as the world watches on. Already many Ukrainians have fled towards the West of the country, with fears the conflict could spark a migrant exodus into Europe as people escape a nation under attack.

Suggesting Mr Putin will not stop in Ukraine, President Volodomy Zelenskyy made it clear the Russian leader has larger ambitions in mind should he not be stopped.

He said: “If you, EU leaders and leaders of the free world, do not really help Ukraine today, tomorrow the war will also knock at your door.”

Mr Putin has already broken a pledge not to invade Ukraine, although his own rhetoric suggests this is a “special operation” to “demilitarise” and “denazify” the country, whilst at the same time protecting Russians in the East of the country whom he claims are being persecuted.

Yet, on a wider scale, many Eastern European countries are in fear the war could spill over into mainland Europe.

The EU, Britain and the US have condemned Russia for its actions, with severe economic sanctions being imposed as a consequence of the action.

Yet, such sanctions are unlikely to deter Moscow from its mission, as Europe rely heavily on Russian gas, which is being used as leverage by Mr Putin.

The Kremlin also has the option of turning East towards China to sell resources, with Beijing unaffected by notions of sanctions punishment, hence providing a ready supply of cash to Moscow.

However, the caveat to Mr Putin pushing a war into the EU comes with more severe consequences.

The majority of Eastern European nations, many of whom were former Soviet Union allies, are now members of NATO.

Any incursion into a NATO member territory will trigger Article 5 of the alliance’s accord and will see other members step in to protect their peers.

Yet Mr Putin himself has already issued an open and frank warning about outside interference over the invasion of Ukraine.

Speaking prior to the military move, Mr Putin said: “Anyone who tries to interfere with us, or even more so, to create threats for our country and our people, must know Russia’s response will be immediate and will lead you to such consequences as you have never before experienced in your history.”

He added: “We are ready for any turn of events.”

Mr Putin has long insisted Ukraine be blocked from entering as a member of NATO.

Highlighting the risk to Europe, British Foreign Minister Liz Truss the attack on Ukraine will be seen as a wider attack on Europe.

Speaking to Sky News, Ms Truss said: “President Putin has actively questioned why other countries in eastern Europe are members of NATO… so this, I fear, would not stop at Ukraine.

“This is an attack on the neighbouring states of Russia and other east European countries.”

One intelligence official speaking to the BBC prior to the invasion said: “Let’s not be blind. If Russia initiates a scenario of any kind it will also initiate action against NATO members”.

They added: “To think war could be contained to one nation would be foolish.”

WILL THE WAR SPILL OVER INTO EUROPE? IS THIS THE START OF WWIII, SHOULD NATO COME TO THE DEFENCE OF UKRAINE NOW? HAVE YOU SAY ON THE ONGOING CRISIS BY JOINING THE DEBATE IN OUR COMMENTS SECTION – JUST CLICK HERE – EVERY VOICE MATTERS!

The argument was supported by a senior British military leader.

Chief of the Defence Staff, Admiral Sir Tony Radakin, told reporters: “The significance of the worst scenarios in terms of a full-scale invasion would be on a scale not seen in Europe since the Second World War”.

Speaking last year, she said: “If Russia will invade you know, you should also take care about the Balkans.

“What Russians are doing now in Serbia – they try to provoke a situation in the Balkans.

“This – the spreading of war in case of Russian invasion to Ukraine – will be much wider than Ukraine.”