A collective of four YouTube stars announced they are moving into their own 10-bed, 15-bathroom ‘Creator Mansion’ in the exclusive Holmby Hills neighborhood that Kylie Jenner also calls home.

Describing themselves as ‘ultra-viral digital creators’, the group boasted that their new two-acre lot is just a few doors down from make-up mogul Jenner’s $36million house.

Their $32million home was previously owned by crooner Frank Sinatra and rapper Future. 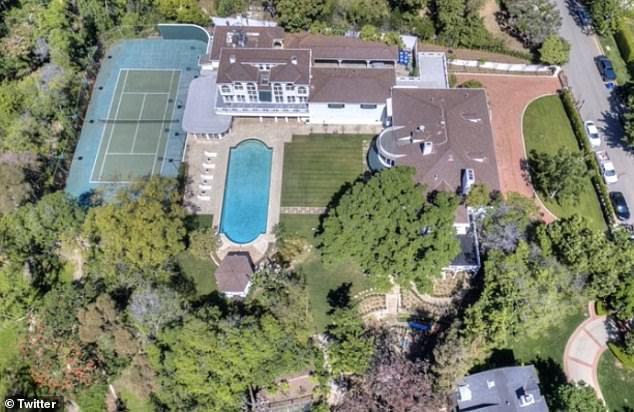 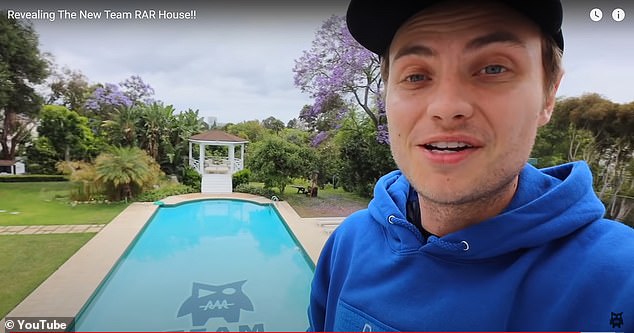 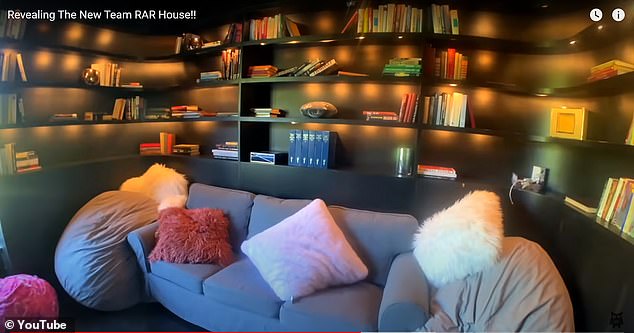 The interior includes a recording studio and a bar

Standing for ‘rare and ridiculous’, Team RAR is a group of friends that team up their separate YouTube channels to make videos for a combined 25million followers.

They first revealed a sneak peak at the new house in June though their YouTube channel.

Last January, the team was awarded a Silver Play Button from YouTube in celebration of their large following.

They were co-founded by social influencer Lizzy Capri, 26, and its CEO Carter Sharer, 25, and are mostly known for their ‘wild and outlandish stunts’.

Their new pad lives up to the group’s out-there lifestyle and features an Olympic-size swimming pool and tennis courts, all of which are going to be branded with their Team RAR logo, the group said.

They added that they will erect a 20-foot statue of their mascot on the grounds of the palatial estate, which was once used as the filming location for MTV’s ‘A Double Shot at Love’ with DJ Pauly D and Vinny.

As well as the mainhouse, the expansive grounds of the new live-in creator’s estate feature two independent townhouses, a chauffeur’s apartment, a recording studio, gym, green house and a full-floor attic.

The attic space is now free for storage or a play room but was once a fully-functioning skating rink when the house was owned by an Olympic ice-skater. 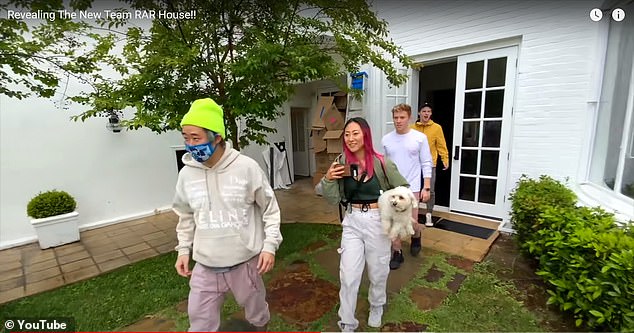 Team RAR is made up of YouTube creators Carter Sharer, Lizzy Capri, Ryan Prunti, Stove’s Kitchen a.k.a Stove Cho and their puppy Milli Capri, all in the twenties 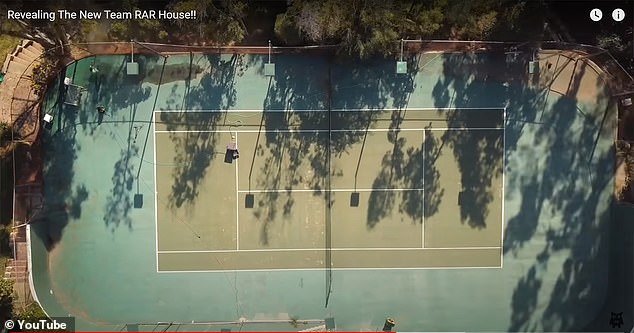 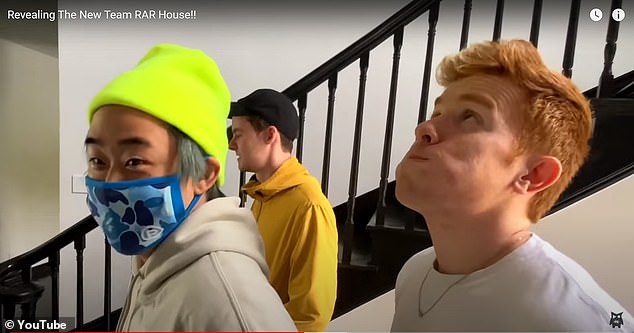 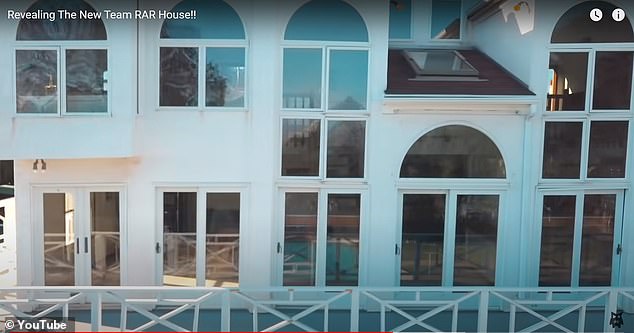 As well as the main house, the estate has two independent townhouses 25million followers

The main house is just as opulent with a formal living room and fireplace, a large family room that has its own bar, an elegant dining room and a chef’s kitchen that will cater to the group’s YouTube creation.

The friends will have to fight over the second-floor master suite which also has a fireplace, as well as a private patio that looks over the backyard.

According to a press release about the new creator space, Team RAR snagged the dream YouTube house with no outside investors.

It is located in Holmby Hills where general house prices run into the tens and evens hundreds of millions. 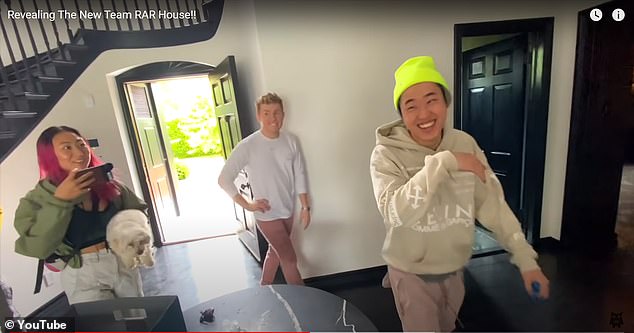 The collective released a video of their first reaction to the house, pictured 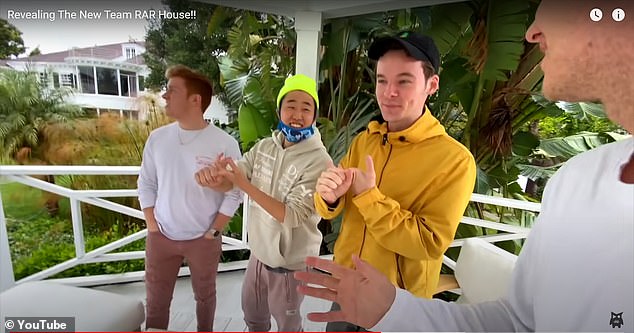 Together the YouTube creators, pictured,  have a total of

Capri first started working with Sharer on Team RAR when she decided to start working on original YouTube content while working as a technical writer for LinkedIn.

‘We were known as the Dream Team,’ she  previously told Forbes, ‘but even before those days, I helped develop two well known YouTube channels, which was sort of the genesis for what would eventually become Team RAR.’

Capri decided to quit her day job once they reached 100,000 followers and the group has continued to grow despite the economic plunge caused by the coronavirus pandemic.

‘We’re creating this business,’ she said, ‘so we have to treat it like a business. We didn’t want to take away the fun aspects of it because a lot of it is super unstructured, but building the infrastructure for the back end and figuring out where my efforts are best spent was difficult.’ 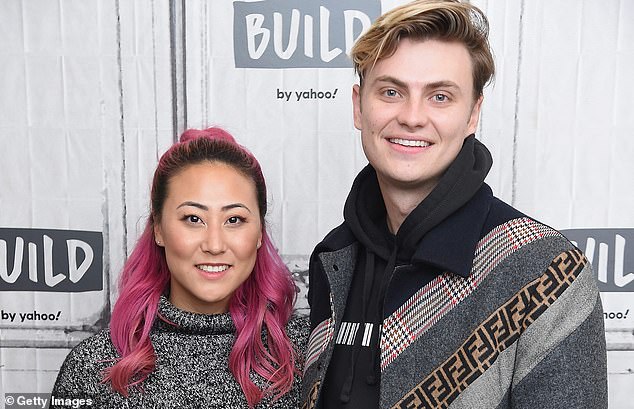 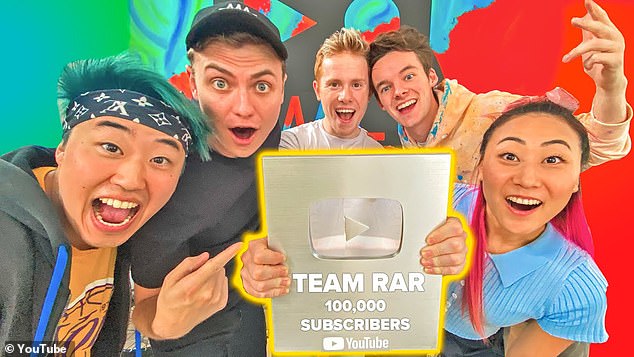 The group was awarded a YouTube Silver Play Button in January

Her co-founder Sharer had started making YouTube content in high school and gradually became a well known personality on the video platform.

‘My YouTube journey from my first video to now has been literally insane,’ Sharer told In The Know.

‘It’s been super fast-paced, it’s been different every day and it’s just crazy to see, you know, step-by-step, just how this journey is unfolding.’

He now creates innovative pranks and challenge videos and has 6million subscribers of his own.

‘It can always be a challenging thing to describe what we do.’ Sharer said. ‘The style of content we do is quite unique.’